St. Louis style smoked spare ribs made me think of that five years ago, as a teacher, I went to St. Louis to teach history in a middle school. Before the start of colonization in the new world, today’s St. Louis area is the center of the Mississippi culture in North America, there are many temples and artificial mounds near this region, almost everywhere, and one of the most famous mounds, Cahokia mound, is along the Mississippi River.

Most of these mounds were demolished during the later construction of the modern city. From the second half of the 17th century, the European footprints had been reached in St. Louis.The whole of 19th century St. Louis, which attracted large numbers of the east coast and European settlers, was growing rapidly, and a large number of blacks began moving in at the beginning of the 20th century. And from then, the St. Louis style has developed gradually.

An elder teacher in my office who was from a small village of St. Louis invited me to his house for dinner. He is friendly and hospitable, so as a local resident, he wanted me, the person from outside, to feel the local culture, and the local food is the beginning.

Louis style ribs are. In order to get rid of the less desirable parts of the spare ribs, you need to trim the ribs, so the St. Louis style is just a style about how to trim the ribs. And in that way, you can make the ribs look better and just like a rack of baby backs. The picture below will show you what it looks like. 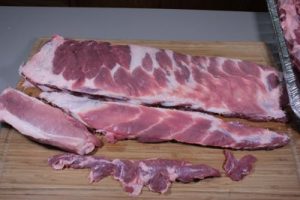 Now here are what you need for the St. Louis style ribs. First, St. Louis style spare ribs, 2-4 racks of it is okay. Second, a foil which is heavy duty. Third, a full-size foil pan, about 12 x 20 can make the foil work best. Finally, your passion and your patience are the most important things that you need for cooking this special St. Louis ribs.

Take the spare ribs out of the package and use the cold water to rinse them. You can buy the St. Louis style ribs in the stores if you’re worried that you can’t make sure that there were no bone fragments. Pat the ribs dry with a clean paper towel and set aside.

you’ll notice a shiny, plastic-like membrane coating the bones when the ribs are laying bone side up. Make the membrane loose by putting your finger, a spoon or some other implement it and use a paper towel to grasp it in order to pull it clean off. If you want to make it clean, you need to take practice for a long time, practice makes perfect. But remember that, if you have trouble with it, don’t fight with it, leave it at what you can get. The world won’t disappear if the membrane remains.

Lay the bone side up, use lots of the special rub to coat the meaty part of the bone side. Don’t be stingy and then you will taste the most delicious ribs that you never try. Sprinkle over the bone area a little and leave them sitting in this configuration until they get that “wet” look, that process will last for about 10 minutes. 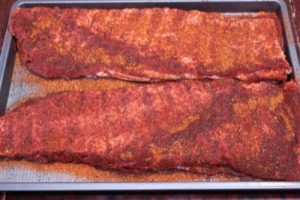 Turn the ribs over to meaty side up and sprinkle the special rub over the other side so that you can make sure that hit the whole ribs. After doing this, you can place them in the fridge for about an hour, and then you can get a moist rib with a nice paste. The flavors float into your nose and there is some drawn back into the ribs. How beautiful it is! 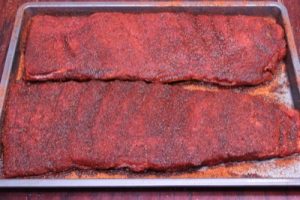 Set up a smoker and turn it to 230°F with indirect heat. Fill the water pan up with hot water if your smoker has one. The process will last about 4 hours so you need enough smoking wood to support it, a mix of pecan and cherry are the good choices.

Place the ribs on the smoker grate bone side down when the smoker is ready, leaving at least an inch between each one so that the smoke and heat can have access to all sides of the meat. This process will last for about 4 hours, and the rub will turn into a crust during this process, after 4 hours the meat will be done and be flavored by the smoke.

Take the ribs out of the smoker carefully and use the heavy duty foil to wrap it individually. Tear off the 18-inch foil into many pieces about 30-36 inches long, I had 2 pieces of 30-36 inch-long foil to cover 2 racks of ribs, laying on top of each other. The first rack which laid in the center of the top piece of foil was taken off. Before the top was folded down over that, The bottom of the foil was brought up over the ribs, and then fold over each side carefully.

Turn down the temperature of the smoker to about 200°F because the ribs are done and we just want to let them tenderize and this step will last for about 2 hours.

When the meat will continue to tenderize, we just want to let the ribs rest at a really low heat, turning down the smoker another 30 degrees to 170°F, and in this temperature, the fat will render and the bones will loosen from the meat.

This process only will take about 1.5 hours and the time is flexible to adjust. After about 1.5 hours open one of the packages, grab a bone and twist it, you can rotate the bone and pull it out of the meat without efforts and any remains, then the ribs are done.

Unwrap and Remove Them Bones

In order to get to the bones, you should unwrap the ribs and flip the rack over to bone side up. Grab each bone and rotate so that you can make sure it’s loose then you can pull it out of the meat and discard without any efforts. Cut the meat into 1-inch pieces when you remove the bones from the entire rack, and here comes the picture shows how tender and juicy they are! 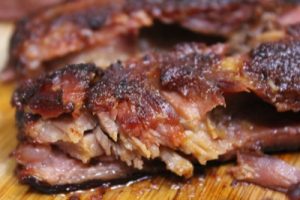 What impresses me most are the St. Louis style ribs and the local people who live in there for their entire life. Not only does the friendship with local people make me feel like at home, but also the foods. The moment I left there, tears ran down.