Steak is a piece of meat generally sliced across the muscle fibers, potentially including a bone. This exceedingly tender steak is cut from the tenderloin. So today I will introduce a kind of cast iron steak recipe. 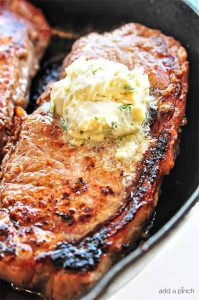 Last summer, when I stayed at home, I often made a kind of cast iron steak recipe. In fact, some of my favorite steak dinners include a good cut of beef, appropriate salt and pepper, and a skillet.

A good, heavy-based skillet is crucial for a well-seared steak recipe. In my house, I have many skillets which can be chosen, but my favorite skillet is the cast iron skillet. I love the cast iron skillet because I can really heat up the pan without ruining either the pan or the steak. Never use a cheap, thin metal pan, unless you like your steak burned. 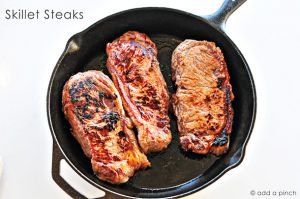 So maybe the following recipe can be called cast iron skillet recipe. In order to get that good taste and keep the meat fresh, I need steaks that are at least one inch thick.

A steak close to room temperature will cook more evenly than a cold one. When I slice into it, most of the interior will be cooked to the reddish-pink color and tenderness.

If I don’t see such a steak packaged at the supermarket, I will ask the butcher behind the counter to cut one for me. Prime stick has the best marbling, texture, and flavor. It can be found in the markets, instead going straight to restaurants or overseas. Remember that, taste and compare the steaks from different markets and stick with what you like.

Nothing can beat the sear of a steak cooked in a cast iron skillet. If we want to make cast iron cooking more delicious, we must add Gorgonzola herbed butter into this recipe. If you want to know how to make this cast iron steak recipe, read the detailed steps as follows: 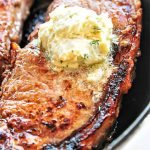 For the herbed butter: