You are here: Home » Uncategorized » 9 Cool Kids Camping Games: Get Fun Around Campfire

Campfire always leaves a beautiful memory to people.  But when the adults drink and dance, what can kids do for fun? I gathered some interesting kids camping games to allow them to get along with nature and seek for happiness by themselves.  Our parents gave us precious memories when we were still kids so we should deliver it to them as well.

Children always get very curious and unstoppable so when they are playing, there better be an adult in charge to prevent accidents. Actually, all camping activities for kids that I recommend are safe and quite fun, so you don’t have to worry about that too much.

What can entertain the kids? 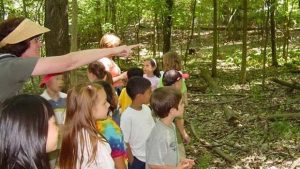 Are you looking for a simple scavenger hunt for your kids while they play outdoors?  Now that is going to get them energized. This game gets unconditional love from all kids.  I included things that they could find, although they may have to look hard. a bit.

This is also a great activity to do in the fall because you will find a completely different variety of items ranging from leaves to acorns. I love these type of activities for my kids, it gets them all psyched up ready to discover nature.

Having a Camping Olympics is a fun way to spend time together and have some laughs. Depending on the ages and number of campers, you can have a team competition or individual games. If you have 6 or 8 kids, you can pair off into 3 or 4 teams. If you have more than 8 kids, you may want to divide into 2 or 3 larger sized teams. The next consideration for your Camping Olympics is to come up with a scoring system and prizes.

Given the competitive nature of kids,  try to choose prizes for all and a mix of games that involve skill and chance…this makes everyone to keep their eyes on the price. The scoring should allow the teams to not stay in contention through the various events. For example, if one of your camping Olympic games is the bean bag toss, the winning team might get 100 points, runner-up 90 points, and third place gets 80 points.

The scoring system and event selection is key to keeping peace in the camp…although there’s always some that go to tears no matter what you try. You can watch an example of kids camping Olympics videos in here

Flashlight tag is a fun game that mixes hide and seek with tag and needs to be played at night. The game is played by tagging players with the beam of a flashlight instead of your hand and putting them in jail. Follow these steps to play this challenging game of tag. Have each kid guess a number between one and one hundred and whoever comes closest is it. Search for everyone with the flashlight if you are it.

The flashlight must remain on at all times in this game and cannot be turned off or the beams  hidden. Call out the person’s name that you find when you shine your flashlight on them from far away or close by. Send the person you have tagged with the flashlight to jail and continue looking for other players.

End the game when all players are sitting in the jail. The first person that was tagged becomes it and the game starts over.[Click here] for other ways to play flashlight tag

In the traditional game, one player is chosen to be the one answering. That person chooses a subject (object) but does not reveal this to the others. All other players are the ones asking questions. They each take turns asking a question which can be answered with a simple “Yes” or “No.”

Invariants of the game, multiple state answers may be included such as the answer “Maybe.” The one answering may answer each question in turn. Sample questions could be: “Is it bigger than a breadbox?” or “Can I put it in my mouth?” Lying is not allowed in the game. Ways of playing 20 Questions 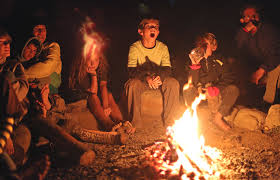 Kids telling stories around the fire.

As I observed before, kids are born with a gift to create stories and tell them. I still remember my kid who told me a story when he was 8 years old. I was totally surprised at that time. So if you bring your children with your friends, why don’t you gather them all together and make them sit in a circle then give them a start and allow them to spray and spit their imagination. I bet you will be trapped in a long tale that is made by kids.

Make all your boys and girls consist three camps, elves, giants, and wizards. They will run across the grassland and the forest to try to tag other members of the group to let them become“dude” while avoid being infected by others.

They will run out of their energy and sit beside the fire like a little puppy who just play the ball and tired.

When you in nature,  you should be curious about the surrounding. So why not pick up a nature guidebook to give your child some knowledge to recognize the insect and plants around you. The kids have the most strong curiosity for anything they see. And you shouldn’t miss such a good chance to educate him some common sense and the name of the animals or plants live nearby.

You need at least two people who already know how to play the game.

to bring on the trip.  Let’s use a sleeping bag as an example) A SLEEPING

BAG”.  The next person says “I’M GOING ON A CAMPING TRIP AND I’M GOING TO

bring on the trip, but it must begin with the letter “G” since the last

letter of the first person ‘camping accessory’ was a “G”.  For example, let’s

everyone says “OKAY YOU CAN BRING THAT ON OUR CAMPING TRIP”.  Say the third person hasn’t caught on to the game yet and says, “I’M GOING ON A CAMPING

TRIP AND I’M GOING TO BRING HOT DOGS”.  Everyone should say, “NO, YOU CAN’T, BRING HOT DOGS” and play continues to the next player until everyone has

caught onto the game.

Rules: Initially, one player takes the ball. In that moment the rest start running away from the one who has the ball.

If he touches the person with the ball, that person has a spot, and he is now the one who has to say ” stop there” and name one person.

If he doesn’t touch the person with the ball, that person is “clean” (has not a “spot”), and the one who threw the ball is called “spot”. He has to throw the ball again and say “Stop there” naming someone. The game does not have a time limit, it finishes when most of the players decide it.