You are here: Home » Uncategorized » Campfire Stories – Creepy Stories to Tell After Dark!

Almost everyone has the experience of making a campfire. We can enjoy roasted meat made by ourselves and the drinks. We can play guitar under the violet moon and dance with the stars. We can also go around and smell the odors in nature instead of urban. But after the sun goes down and we lit a campfire to kill the rest of night, sit around it will be nothing but boring. But if you have story to tell, everything will be better. Today I pick up some interesting stories to share them with you that could be scary or creep. And also my bag has lovely and sweet story for kids to listen before going sleep. And the stories can make your friends’ laughter fly through the wild. I made a list of my campfire stories, and they are coming! 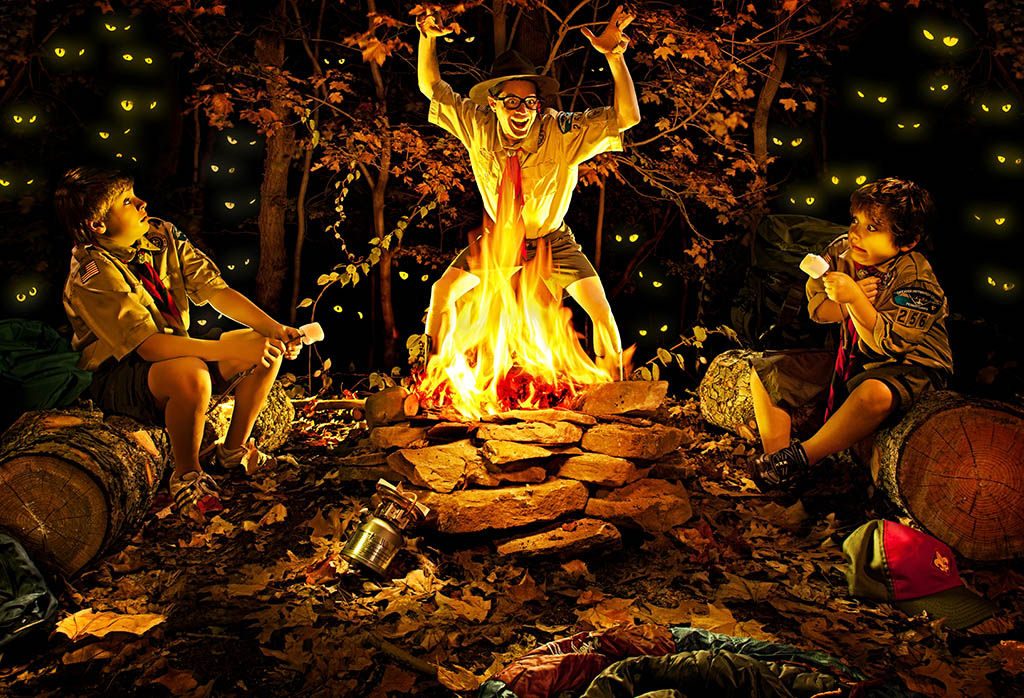 A little girl lives in the Britain alone because her parents work aboard. The only thing as an accompanying is her big dog. The dog is very cute and understanding, it know the little girl is lonely and can’t sleep in the dark and cold night, so it always stay under the bed and stay with the little girl. If the girl feels afraid or loneliness, she will put her hand on the edge and beyond the bed a little. The dog will kiss and lick her hand with it’s warm and soft tongue.

One night the thunder and lightning scatter the sky and the rain knock on the window to make noise. So the girl can’t fall asleep, she decided to seek some mental comfort from her best friends. And the dog gives the response as usual. So she falls asleep soon with the fade of raining. But when she woke up she make a long scream and cry as a lunatic. She found that her dog was severed and all of its guts were ripped out on the ground. And the murderer uses the blood of dogs to write this on the wall “Humans can lick, too!!! Hahaha…”

Tony just took a shower and he is staring the outsides now because he sees a strong man is stabbing a young girl several times. He never meet the things like this before, but he decide to call the police. The man seems like notices him and starting waving his finger to tony to make a warning. But justice in his heart told Tony he can’t give up the action. Something is wired, the man is continually waves his finger and totally ignores Tony’s words like“ the cop will find you and throw you in jail!”. After the man disappeared from the body, tony realized that the man waved his finger 13 for times, and the 13 in the floor he lives. All the attention of policemen is attracted by the bloody body while the door of Tony is being crashed…

Ok after the creepy story I bet your friend is starting tremble. So you can tell a funny story to have a relax.

The campfire stories for kids

The campfire stories for kids

A papaya dropped into the lake from a tree, A rabbit who lived near the tree heard it,”I must run away, or I’ll be in danger.” thought the rabbit, and then he began to run fast. A fox saw him and asked:”Hey, Hey ,Rabbit, What’s happened?” “goo-dong, that goo-dong there.” He thought, it seems that goo-dong is a terrible thing. “I must run away too.” A monkey saw them running. “what happened? Why are you running so fast?”,”Er, Er, here comes Goo-dong.” the monkey didn’t know what a goo-dong was. ” I’d better run away.” He thought and ran quickly with the rabbit and the fox. The bear was running, the deer was running too, and more and more animals began to run. The lion was surprised, “what happened, why are you running so fast?” “Goo-dong, that goo-dong there.” But where was it ? The tiger shook his head，the deer said:”I don’t know either.” The bear said “I don’t know.” The monkey said “I don’t know.” At last, the lion asked the rabbit about it. “that goo-dong lives near me by the river.”

These two stories are so cute that little kids will fall in love with it suddenly. You can tell them to your kids when the night is come and he refuse to go sleep.